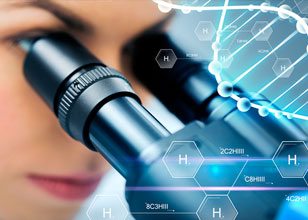 From the laboratory to the patient

Antibody generated through a partnership between ReceptaBio, LCR and the company 4-Antibody (which was later acquired by Agenus Inc.). As the application for drug registration approached, the World Health Organization designated the scientific name as balstilimab, with balstilimabe being the translated version of the DCB (Common Brazilian Denomination) approved by ANVISA. It is a human monoclonal antibody to block programmed cell death protein 1 (PD-1), an important negative regulator (suppressor) of T lymphocyte responses. By blocking PD-1, the immune response increases through inhibition of down-regulation of T lymphocyte activation, consequently increasing the anti-tumor immune response. With the data from the first part of the phase I/II clinical trial, conducted in the United States (NCT03104699), the dose was defined for the phase II clinical trial in cervical cancer (uterine cervix), whose recruitment has already been completed (NCT03104699). Brazil, with ReceptaBio's involvement in conversations with ANVISA, actively participated in this phase II study, being the second country in the world in terms of patient recruitment.

With promising data, this clinical study was the basis for the submission of the BLA (Biological License Application), in April 2021, to the FDA (American regulatory agency), aiming at the registration of balstilimab as monotherapy in the indication of Cervical Cancer, second line. In June 2021, the FDA granted a prioritization of the data evaluation of the Phase I/II clinical trial (Priority Review), that is, the review of the results of this study will occur in 6 months instead of the standard time (10 months). If the data presented meets the safety and efficacy requirements established by the FDA and approval is granted, the drug may be marketed with the phase III clinical trial still ongoing. A similar application format for the registration of balstilimab as monotherapy in the indication of second-line cervical cancer will be requested in Brazil.

As it acts by increasing the response of the immune system to the tumor, studies are planned in various therapeutic indications for balstilimab.

In addition, balstilimab has also been evaluated in combination with other immunotherapeutics. In another phase I/II clinical trial (NCT03495882), in which cervical cancer was also the indication of choice for the second stage of the study, balstilimab has been evaluated in combination with the anti-CTLA-4 RebmAb600/AGEN1884/zalifrelimab. Partial data presented at an international congress in 2020 showed promising results also with the combination.

Like RebmAb700/AGEN2034, this antibody was also generated through a partnership between ReceptaBio, LCR and the company 4-Antibody (which was later acquired by Agenus Inc.). With the approach of the application for drug registration, the World Health Organization designated the scientific name as zalifrelimab, with zalifrelimabe being the translated version of the DCB (Common Brazilian Denomination) approved by ANVISA. It is a human monoclonal antibody that blocks cytotoxic T lymphocyte-associated protein 4 (CTLA-4), an important negative regulator (suppressor) of T lymphocyte responses. By blocking CTLA-4, the immune response increases, through inhibition of down-regulation of T lymphocyte activation, consequently stimulating the anti-tumor immune response.

This molecule had its phase I clinical study in the United States (NCT02694822), which has already ended. A phase I/II clinical trial in combination with balstilimab (RebmAb700/AGEN2034) (NCT03495882) is ongoing, but its recruitment was completed in 2020. Brazil, with ReceptaBio's involvement in conversations with ANVISA, was also involved in the phase II study.

The humanization of the murine anti-NaPi2b antibody and the generation of a stable cell line for the production of the humanized antibody RebmAb200 - Upifitamab Rilsodotin (UpRi) -, was a pioneering work in Brazil conducted by ReceptaBio. The expression of the RebmAb200 target, NaPi2b, a phosphate transporter protein found in the cell membrane, was evaluated by collaborating researchers at ReceptaBio and high expression was found in breast, lung and ovarian tumors, associated with high specificity, efficiency and sensitivity of the antibody . In July 2015, RebmAb200 was licensed to Mersana Therapeutics, an American biopharmaceutical company that has state-of-the-art technology for the production of ADCs (antibody-drug conjugates). This was the first intellectual property of a drug licensed in Brazil. Preclinical tests using the RebmAb200 with ADC technology from Mersana Inc., which received an award for the best ADC technology platform in 2016, showed great anti-tumor activity in animal models, confirming its potential as a new biopharmaceutical. This ADC - named by Mersana XMT-1536 and newly named UpRi, upifitamab rilsodotin, has been evaluated in a First-in-Human phase Ib/II clinical trial (NCT03319628) in the USA. In 2021, the phase II study of the UpRi in ovarian cancer was started and a phase II study in lung adenocarcinoma (NSCLC) is planned to start in 2021.

A new ADC from the same monoclonal antibody as ReceptaBio, RebmAb200, but with a differentiated technology for toxin conjugation, had its clinical development started in 2020. XMT-1592 is currently being evaluated in a phase Ib clinical study, with phase II planning for ovarian cancer and lung cancer (NCT04396340).

The humanized monoclonal antibody RebmAb100 recognizes the Y antigen of the Lewis blood group (LeY). LeY has a pronounced expression in tumor tissues, especially in epithelial carcinomas, when compared to its expression in non-tumor tissues. LeY antigen is considered a tumor target with important potential in diagnosis and treatment. Immuno-histochemical studies, preclinical studies, and Phase I clinical tests were conducted with RebmAb100 by LCR researchers and their results justified the continuation of clinical trials aiming to determine their therapeutic efficacy. ReceptaBio has conducted Phase II clinical trials in Brazil in patients with ovarian (NCT01137071, NCT00617773) and breast (NCT01370239) tumor.

It is a monoclonal antibody that recognizes Lewis blood group B antigen (LeB). As observed for LeY, LeB expression is increased in several types of carcinomas of epithelial origin, such as colorectal, lung, ovary and breast, among others. Notably, elevated LeB expression is correlated with less favorable prognoses of these carcinomas, indicating favorable perspectives for therapeutic use of the antibody in different neoplasms.

The antibody recognizes antigen A34, a glycoprotein belonging to the family of adherent junction molecules. Its expression is particularly high in gastric and esophageal adenocarcinomas. More comprehensive assessment of possible therapeutic uses for RebmAb400 has been carried out in order to better define the development of this monoclonal antibody.